“It is shocking! This completely goes against the constitution of South Africa” exclaimed the director of the Gay & Lesbian Network, Anthony Waldhausen.

Section 16 of the constitution states that “Everyone has the right to freedom of expression, which includes freedom of the press and other media; freedom to receive or impart information or ideas; freedom of artistic creativity; and academic freedom and freedom of scientific research.” It also contains the following limitations to freedom of expression “The right in subsection (1) does not extend to propaganda for war; incitement of imminent violence; or advocacy of hatred that is based on race, ethnicity, gender or religion, and that constitutes incitement to cause harm.

There have been protests against the film, especially in the Eastern Cape, where Traditional Leaders have expressed concern that the film had ‘inaccurately portrayed the Xhosa initiation tradition and flouted cultural norms and practices’. The commission for the Promotion and Protection of the Rights of Cultural, Religious and Linguistic Communities have recently argued that the film is “blasphemous to the sacred rituals of initiation” and said the use of Jesus Christ and King Shaka Zulu “poses a concern in our young democracy and the film may incite violence”.

On 14 February it was announced that “The Film and Publication Board (FPB) Appeal Tribunal has overturned the classification rating of 16 [for language and sex] that was given to the film Inxeba – The Wound and gave it a rating of X18 with the classifiable elements of Sex, Language, Nudity, Violence and Prejudice.” 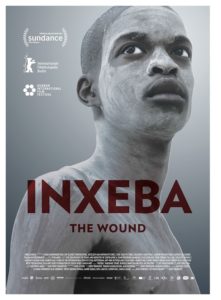 The film has claimed eight South African Film and Television Awards (Safta) nominations, including Best Actor, Best Directing and Best Film. It has also won 19 awards at 44 festivals in more than 25 countries, including South Africa. The film was shortlisted for this year’s Academy Awards in the category of Best Foreign Language Film. However, it did not make onto the final nominations list.

Inxeba premiered in competition at the Sundance Film Festival in 2017. It tells the story of Xolani, a lonely factory worker, who joins the men of his community in the mountains of the Eastern Cape to initiate a group of teenage boys into manhood.  When a defiant initiate from the city discovers Xolani’s best-kept secret, a closeted love affair, his entire existence begins to unravel.

The Gay and Lesbian Network will be working with other LGBTI organisations and allies in South Africa to exert pressure on the Film and Publications Board to reverse its decision, said Waldhausen. We urge everyone to sign an online petition at http://ow.ly/lpps30ipVUp

We would also like to invite the public to a screening and discussion on Saturday 24 February at the Univerysity of KwaZulu Natal (Pietermaritzburg Campus) at the William O’Brian hall at 2pm.