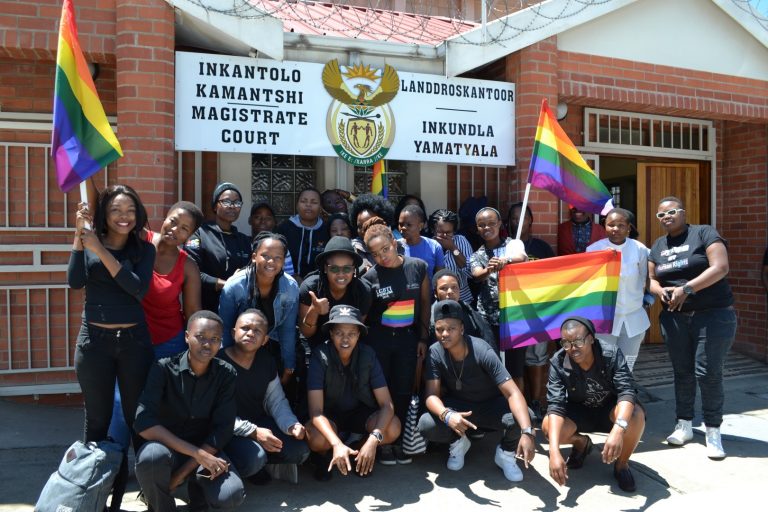 A 17 year old girl from Watersmeet, just outside of Ladysmith, who is open about her sexual orientation (she identifies at a butch lesbian) was viciously attacked and raped by two men who reside near her home. This is the third time in her young life that she has been raped by men who believe that savagely raping a lesbian will ‘turn her heterosexual’ and make her ‘a real women’.

This is known as ‘corrective rape’ which is the use of rape against people who do not conform to perceived social norms regarding human sexuality or gender roles. This means that the rape was premeditated, intentional and accompanied by malicious aforethought.

The bail hearing for the alleged rapists, one is 22 years old and the other is 20 years old have continuously been postponed, and today (4 December 2017) at the Magistrates Court in Ladysmith, bail was set at a measly R1000 for each perpetrator. It is alleged that this is the second time that that one of the perpratators has raped the victim. The hearing will be held on 26 January.

The Gay & Lesbian Network (GLN) is deeply saddened by this news. The GLN team have been supporting the young lady in terms of reporting the case to the National Task Team and the Rapid Response Team, both of whom respond to Hate Crimes. The case has being heard during the 16 days of activism against gender based violence. Londeka Xulu, the Outreach Programme coordinator at GLN says “It is devestating to see how the LGBTI+ community is still at such a risk. In terms of the law, we are protected, but in reality we aren’t.”

A hate crime is an offence by which a person is motivated on the basis of that person’s prejudice, bias or intolerance towards the victim of the hate crime in question because of one or more characteristics or perceived characteristics of the victim. GLN have also been counselling her and have referred her for further help.

One needs to take into account the nature of the rights of the victim and the nature of the crime; the severity of the emotional and psychological damage, as well as the fact that the impact of hate crimes and hate speech extend beyond the victim, and to the group to which the victim belongs or is perceived to belong.

If you or someone you know has been a victim of a hate crime, please contact GLN for free counselling and referrals for further assistance if required. We also offer workshops for various stakeholders as well as sensitization training.

GLN is a registered Non-Profit Organisation which does pioneering work with the lesbian, gay, bi-sexual, transgender and intersex (LGBTI) other marginalised communities and people. We aim to create a non-discriminatory, supportive and accepting society in which members of all communities are uplifted and developed. This is done though our various programmes.

You can help us continue the work that we do by assisting with donations and/or volunteering. Please call 033 342 6165 or email info@gaylesbian.org.za for more information.